The Tomb Of Nick Cage

Fuel the Funeral Promotions & Entertainment Presents: GOTH x EMO Night Halloween Party! Featuring: Superbloom & The Tomb of Nick Cage Let's get spooky! Join us for the wildest Halloween party on the Northshore as we welcome back your favorite EMO Cover Band, Superbloom! They'll be covering all of your favorite hits from Fall Out Boy, My Chemical Romance, Falling in Reverse, Pierce the Veil, Sleeping with Sirens, Rage Against the Machine, Green Day and MORE! Joining them will be New Orleans very own Tomb of Nick Cage! TONC is a Paranormal Horror Rock meets New Wave style band, sharing old world horror for the new world order! Doors: 8:00PM | Show: 8:30PM $10.00 Cover | 21+ Entry 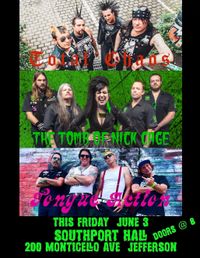 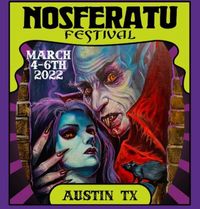 Austin Texas is now home to it's very own festival celebrating one of the first vampires to grace the silver screen: Nosferatu! Not only do we celebrate Nosferatu but we embrace all things Vampire in this fun weekend long Vampire party! 2019 marked the first year of this vampire themed annual event! 2022 will be our 4th year and will be the 100 year anniversary of the film! Join us and hang out with like minded individuals who embrace the spooky! 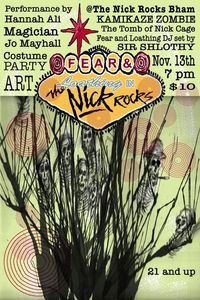 Fear And Loathing in Birmingham, AL! A Hunter S. Thompson Party at The Nick !

Fear and Loathing in Alabama... AT THE NICK! You are invited to party and take a trip to a world inspired by Hunter S. Thompson. A night to experience!!! Show up and see why this piece of cinema has such a unique following. PRESENTED BY ART BY BURX Featuring Fear and Loathing inspired art and more. LOCAL ARTISTS SIR SLOTHY - DJ and EMCEE JOSEPH MAYHALL - LOCAL BADASS MAGICIAN MUSIC PERFORMANCES- KAMIKAZE ZOMBIE(Bham) TOMB OF NICK CAGE( New Orleans) BELLYDANCE BY HANNAH ALI SPECIAL APPEARANCE BY HUNTER S THOMPSON

CAFFETINE :: The bands sound has been compared to a lot of classic Industrial music artists including Front Line Assembly, Skinny Puppy, Ministry! caffetine.bandcamp.com 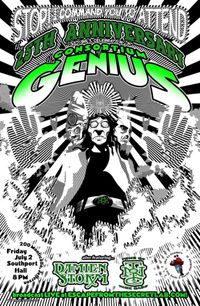 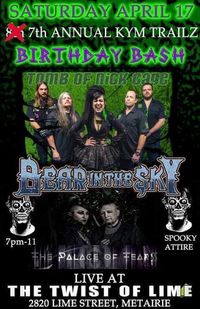 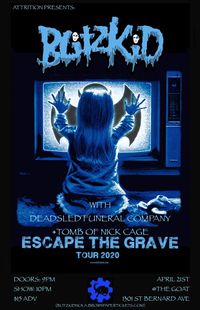 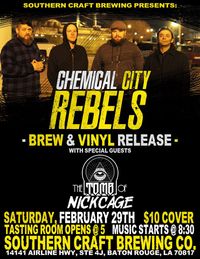 Come celebrate Leap Day with us at Southern Craft Brewing Co. We'll be playing some tunes with our friends in The Tomb of Nick Cage and the vinyl pressing of our album A New Plague will be available.

Southern Craft will be releasing a black IPA that we teamed up with them to make named "Western Decline" after the tune on our album.

The tasting rooms opens at 1pm so come early and sample some beers. Music starts at 8:30pm. We hope to see you there. 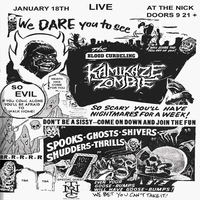 The Nick Rocks w/ Kamikaze Zombie and The Goddamn Rights

$8 ADV / Age 21 And UpAdditional Info:The Nick is a Private Club - Membership Card ($5 Per Year) & Valid ID - 21 + Up to EnterTickets:https://www.ticketweb.com/event/kamikaze-zombie-the-tomb-the-nick-tickets/10065585?REFERRAL_ID=twfb 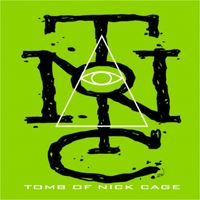 Live at Monstercade with Solemn Shapes and Mauve Angeles!

THE TOMB OF NICK CAGE from New Orleans is on tour for their 2nd full length album, CRYPTIDS and CREATURES!Industrial Sequencer Witches SOLEMN SHAPES will be supporting, along with the magical beast, MAUVE ANGELES.The Tomb of Nick CageParanormal Horror Rock meets New Wave. Old world horror for the new world order.www.thetombofnickcage.comSolemn ShapesDarkwave/ElectrohorrorSomewhere between a soundtrack of 80's horror movies & dark dance floor tracks in the dead of night.solemnshapes.bandcamp.comMauve AngelesLo-fi escapism from singer/songwriter/multi-instrumentalist Eric Gilstrap of Spirit System, Telltale & Elevator Actionhttps://mauveangeles.bandcamp.com/releasesDoors at 8, show at 9$7 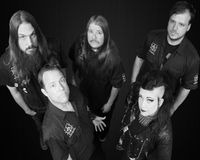 Live at The Pour House with Solemn Shapes and Eyeball

A night of jamming out to psychedelic rock, horror rock, and dark electronica!EYEBALL is a collective of beings from Raleigh, NC who use guitars, drums, synthesizers, effects, noise, and feedback to conjure up their own brand of psychedelic neo-space rock.Formed in 2015 by drummer Trey McLamb and guitarist Myriam Martian through a mutual interest in art and music, the two began exploring effects-driven music combined with lyrical themes of mysticism, biology, science and astronomy. They were soon joined by bassist Brian Oaksford and keyboardist Aaron Albrecht.They have released two videos directed by Josh Sokal, “Acid War” and the music-film “Inside The Moon” as well the 4-song EP produced by Jeff Eacho titled “Paradox of Eternal Limits”.https://eyeball-band.com/From The Tomb of Nick Cage- We are an engaging and theatrical Horror Rock / New Wave, Metal and Deathrock band from New Orleans! Inspired by the mysterious Tomb of Nicolas Cage that now sits in historic St. Louis #1, we began to wonder if there were secrets behind this mysterious pyramid, and began to speculate on its strange origin. This led us down a path we never expected - filled with conspiracy theories, horror and secret societies as old as time itself. Started by Melissa (Kym Trailz) as a musical scoring project for a local short horror film, the band grew quickly into a fully realized concept.In our short years together, we have begun traveling the convention and dark music festival circuit (The International Cryptozoology Conference 2018, Nola Time Fest, Creepy Fest, Pensacon and Convergence XXII -where we held court over the worlds first live band GOTHIC karaoke- to just name a few.) we have been noticed by media outlets both locally and overseas, performed a secret, elite show and ritual with the almighty Chewbaccus marching krewe and have continued our pursuit of the mysterious Illuminati, hoping to draw them into the public eye with our sonic lures.http://www.thetombofnickcage.com/Solemn Shapes is a North American electronic band based in Charlotte, NC whose music ranges from dark electronica to the industrial and experimental genres. The band performs a live blend of electronic music with synthesizers, samplers and drum machines to create dark distorted beats, vocal/sample effects and warped synth tones which evoke a haunting, psychedelic vibe. Solemn Shapes is currently in the studio finishing tracks for an EP to be released literally any minute.https://solemnshapes.bandcamp.com/

We return to Lafayette for a VERY special event! Details coming soon!

Annual event for FITE (famine is the enemy). $10 admission. Costume contest w a $500 gift certificate for a tattoo as the prize ($5 entree fee)Music by:Big FrankDeadCenteredTomb of Nick CageMegaWitchThis side faces the sky.

Birthday Party for Chris Chaos of Alt 92.3 The Roux! 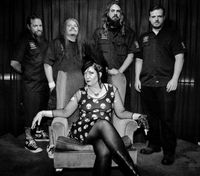 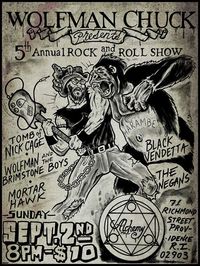